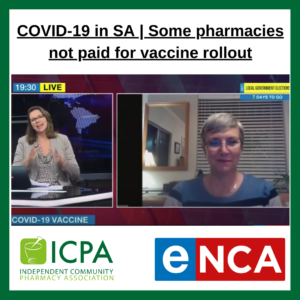 We are all systems go to minimize the potential damage a 4th covid-19 wave might bring – however a number of Independent Community pharmacies and private pharmacies are saying that the National Department of Health is not paying them for the vaccines given to uninsured patients.

Outlining the agreement with the NDoH – Independent giving out free vaccinations to patients without medical insurance.

In the beginning pharmacies (private sites) were only vaccinating uninsured patients if they were referred via the EVDS. In July 2021, a circular was released from the NDoH opening up vaccinations to all uninsured and insured patients

It is apparent that the NDoH realized the asset they had in the private sector as well as the accessibility of private sites like Independent Pharmacy to administer the Covid-19 vaccinations.

The sales and distribution agreement between the NDoH and community pharmacy states that a credit note will be passed for all uninsured patients who receive a vaccination, which will cover the cost of the vaccine as well as the administration fee.

The admin fee is a cost-recovery admin fee – for basic overheads such as needles, syringes, diluent, staff time, operational costs. The vaccination returns no profits for these vaccination sites. Our pharmacies knew this was a nonprofit effort from the beginning.

The delay in payout from the NDoH is largely due to payment/credit note mechanisms (platforms) which should have been put in place and activated right at the beginning of the vaccine roll-out. The ICPA and private sector gave the NDoH the tools necessary to facilitate these credit notes – however this has not been implemented by the NDoH and community pharmacies are now running at a loss.

The impact is that many community pharmacies are unable to carry the costs of vaccinating the uninsured. The costs are raising to the Millions in Rands that have not been recovered – and sadly many of these sites have to close their vaccination doors.

The NDoH is not disputing the admin fee – the passing of the credit note mechanism must be put in place and used so that community pharmacies and other private sites can submit their claims and recover the Millions of Rands spent on vaccinating the uninsured.