Major pharmaceutical retailers have been accused of trying to oust small independent pharmacies, often in collusion with landlords, from malls and shopping centres.
It’s got so bad that the Competition Commission and Independent Community Pharmacy Association (ICPA) have received complaints about the matter.
City Press spoke to a few of pharmacists and the ICPA.

Ntakadzeni Nndanganeni, the owner of Dohwi Pharmacy, an independent pharmacy in Musina Mall in Limpopo, said she has had to fend off unwelcome attempts to buy her out.
The mall’s management had informed her that her lease – which is due for renewal in September this year – cannot be renewed.
Nndanganeni, who has been trading in the mall since 2009, said as early as January 2017 she was approached by banking giant Investec to surrender her business for R2.5 million, which she rejected.
The initial informal offer, she said, was R500 000. 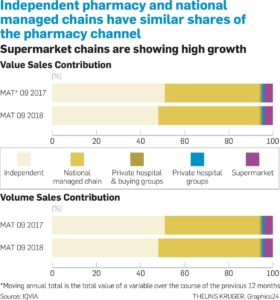 Responding to questions about the matter, Darryl Mayers, the joint CEO of Investec Property Fund, said the Investec Property Fund was a co-developer of the mall and actively supported the role of small business in the country.
“In the course of the Dohwi Pharmacy’s lease the tenant fell into arrears, did not comply with the terms of the lease agreement and was in breach of its contract with the co-developers,” he said.

“The basis of the settlement negotiations and subsequent offer made in respect of the licence are confidential and are sub judice. Having said that, the purchase and transfer of trading licences is common practice across the industry and the value placed on the offer was based on information of previous deals struck in the industry,” Mayers said.

“Renewal terms are contained within the lease agreement and a landlord has every right not to renew a lease – particularly when a tenant is in breach of a contract,” he said.
The bank subsequently sent a formal offer of the same amount in which it stated that the amount was a settlement for surrendering of the pharmacy and its licence “in order for a new pharmaceutical supplier to operate and trade in the Musina Mall”.

The offer also made provision for the cancellation of her lease agreement.
She rejected that offer too.

However, the rejection seemed to have irked the landlord of the mall, property company the Moolman Group, which subsequently informed her that her lease would definitely not be renewed.
Speaking to City Press about the ordeal, a clearly distraught Nndanganeni said she was recently told by the management of the mall that her lease would not be renewed and Dis-Chem would instead take her place.

She approached the Competition Commission and wrote to councillor Mihloti Muhlope, the mayor of Musina municipality, seeking intervention.
“This is still a white man’s profession. What makes it worse is that non-pharmacists can own pharmacies so that opens the way for whoever has lots of money to come in,” she said.

Jaco Geldenhuys, senior asset manager at the Moolman Group, said the recent major upgrade of the mall, which doubled its lettable space, had attracted interest from several national retailers including some which have no presence in the area.
“As a responsible landlord, all tenants are subject to the parameters of their lease agreements, which the landlord at all times honoured. As such, after due consideration of several factors, Musina Mall informed Dohwi Pharmacy that its lease would not be renewed. Musina Mall therefore denies and rejects all the allegations levelled against us,” Geldenhuys said.

Another independent pharmacist trader, Andrew Chauke, owner of Masingita Pharmacy at Masingita Mall in Giyani, said he had also been coerced by the mall’s management to surrender his business.

However, in his matter, it seems, the owner of the mall, Masingita Group of Companies, was in the dark.
Chauke said he was approached by the mall’s management last year in November and told to make an offer to Dis-Chem as they could not have both his pharmacy and Dis-Chem in the same mall.

“They told me that they propose that I should sell my silence to Dis-Chem so that Dis-Chem can begin to operate in the area as the mall cannot accommodate three pharmacies – including the new Clicks store that will also be opening this year.
“This proposal left me anxious and uncertain about the future,” he said.

Masingita Mall centre manager Nomsa Ncongwane rejected the allegation and said she had not organised any meeting for Chauke and did not know about any buyout talks.

Chauke said a subsequent conversation with the managing director of Masingita Group, Mike Nkuna, who said he did not know of the matter until City Press requested responses, he was assured his decade-long lease would not be tampered with.

“He [Nkuna] confirmed that my 10-year lease is still in place and will be honoured.
“He also told me that he will build and not destroy another black person. I thanked the landlord for believing in me and for having given me the opportunity to do business at his shopping centre,” Chauke said.

Nkuna said: “Competition is healthy among retailers and we promote the concept of giving our customers choice.
“Masingita Pharmacy was renewed for a period of 10 years in September 2015 thus has a lease until August 2025.
“Considering the length of his lease, we are confident in him as a tenant,” Nkuna said, adding that the mall had sufficient space for local businesses.

Dis-Chem said it had not been told of either case.

“Prior to your email, we were not aware of any of the allegations mentioned by you.
“We were offered both sites by the respective landlords but have had no engagements or dealings with any of the individual pharmacies mentioned,” said the company’s chief executive Ivan Saltzman.

ICPA’s Maimin said the problem of a major retailer pushing out smaller pharmaceutical traders was rife and several members of the organisation had complained.
She said last year at least 18 pharmacies among its members had had to close, with seven bought out by major corporates.
“We have regular complaints from members. Among existing pharmacies, if a corporate wants to enter a centre where there is an existing pharmacy there is pressure on that pharmacy to sell to the corporate. Where the pharmacy is not interested in a sale then the second approach is through landlords where rents are increased and leases are not renewed to accommodate the corporate.

“The existing regulations may allow for multiple licences to be issued through the health department and the small pharmacy is pushed out of business. We have had pharmacies that have been forced to move to another part of a centre to accommodate the corporate in their location,” she said.
Maimin also said members had said there seemed to be collusion of some type.

“There seems to be an existing agreement between landlords of major centres and corporates in which corporates are given preference. Because of their size, they can acquire rental space much cheaper than the smaller pharmacy. Deals are done between developers/landlords and corporates years before a centre opens. A young pharmacist looking for an opportunity to enter the market is excluded unless he/she becomes an employee,” she said.

Tembinkosi Bonakele, the commissioner of the Competition Commission, said though the watchdog was not probing the pharmaceutical industry, it was busy with one into access to shopping malls.

“We are not looking into the pharmaceuticals but access to the malls generally and that investigation might be related because some of these big retailers will also sell pharmaceuticals sections and that may prevent other pharmacies from getting into the mall,” Bonakele said, adding that he had not noticed a trend of complaints from the pharmacies about being pushed out of malls.

TALK TO CITY PRESS
Have you ever been at the receiving end of corporate bullying? How did you respond? What should government do to ensure small businesses don’t get sidelined by big corporations? SMS us on 35697 using the keyword BULLY and tell us what you think. Include your name and province. SMSes cost R1.50. By participating, you agree to receive occasional marketing material.